While ago, I posted my traumatic experience of breastfeeding. Thinking back, I couldn’t wait to get away from the feeling of guilt for feeding my baby girl the bottles all the time, which was exacerbated by the pro-breastfeeding trend in recent years. All I wanted back then was to start giving her solid food as soon as possible so that at least I can feel I am giving something natural, as opposed to something artificial (very biased I know).

As such, I was always picturing about introducing her solid food after she would turn six months, a common benchmark in Japan. I was thinking about moving forward slowly and carefully to see what food our baby could take or not take, as many of the first timer parents would do. I thought of starting off with rice porridge, which is the very first food to start feeding your baby in Japan. It is culturally taken for granted, and if you say otherwise people may get confused. We just don’t know that other options exist. If you ask any Japanese person, I bet almost 99.9% of us would say the same. Historically speaking, rice has played imperative roles over the years in this country, not only as our staple food but also as alcohol (sake), condiments (mirin, vinegar, etc.), glue (used for dyeing), fertilizer…. there is even this old women’s tale that they would give the watery part of rice porridge to newborn babies if their mothers could not produce enough breast milk. It’s almost like you cannot talk about Japan without understanding the importance of this incredible grain, because rice is our norm and the base of what we are.

So naturally, I thought that is what I was going to do for our baby girl. But isn’t life interesting because there is always something unexpected or unthought of happens in your life? When our baby girl was five months old, we visited our family friends in Hong Kong. It was our first trip abroad with our little one, so we packed (more than) sufficient amount of formula and nappies, being very excited for her to meet our friends and their three girls. We arrived at their beautiful apartment in one of the skyscrapers on the Hong Kong Island, and proudly and happily introduced our baby to the entire family. As common in Hong Kong, they had lived-in helpers who excitedly greeted the tiny visitor and reacted affectionately to every single movement she made. At one point the hostess (the mother of 3), the helpers (two of them combined raised more than 20 children), and I were all gathering at their enormous kitchen, talking about babies, tips on parenting, etc. etc. Then suddenly, our friend asked me how old exactly our baby girl was. I said five months, and she enthusiastically said, “oh, so she’s ready for solids! Would you like to try here? M (one of the helpers) can show you how!” And of course the experienced and confident child minder M was beaming with pride, nodding at me with a big smile for assurance. As for me, a moment of panic was going through my head, thinking I was not ready at all even if our baby might have been ready. For a moment I hesitated and was about to decline their offer, but at the same time as silly as it may sound, I didn’t want to appear to be this overly concerned, overprotected and paranoid parent (which I was, of course). And I knew they knew much better. As a result, I found myself saying “OK, let’s give it a try…”

This was how it started, our first baby food experience. According to M, the guru, the best first food is mashed steamed apple, i.e. apple mousse. That’s right, apple, it’s a fruit, not at all rice… Another panic went through my head, but I shook my anxiety off and tried my best to be my normal self. In the kitchen M took out a beautiful red apple and put it in a small boiling steamer, and carefully mashed it when it was done. I still remember this shiny, juicy, almost golden honey like mashed apple M prepared. And she suggested me to give a small spoonful to our baby girl who was curiously sitting in the lilac Bumbo chair on top of the huge kitchen island. It was going to be her very first bite. I thought, from this moment on, her poo would be different forever. She took it, moving her mouth as if she’s really tasting it, and when I offered the second spoonful, she took another, and then another, and then the small portion M had put on a small plate was all gone. Our baby absolutely loved it.

More than three years have past since then, and a couple of weeks ago our now 4 year old was a bit sick with some minor tummy bug. She didn’t have any appetite but would only eat one thing…. and it was apple mousse. Usually in Japan we give rice porridge to those who are ill, which is very common and is followed everywhere including hospitals. But our girl would not eat rice porridge. Every time I made an attempt to feed her rice porridge during her illness, hoping to give her some energy back, she just made faces and spit it out. She just would not eat anything but apple mousse. This puzzled me a lot, because I thought that the rice porridge was the thing to eat when you are ill, and didn’t know there could be any alternative. But through my daughter I finally realised what I took for granted was only true in my home country. When people are ill they actually eat the food they’d feel most comfortable with or familiar with, and this, I now believe, depends on what you used to eat in your early childhood. In my daughter’s case it’s apple mousse, the very first food she ever tasted in her whole life. It is certainly something I did not foresee prior to starting the solids with my girl, and it surely shook my mindset and made me understand about different perspectives in one of the most basic human behaviors.

No dessert, because the kids are having a Christmas party at school today and are given a special Christmas cake from santa🎅🏼

This is the last bento of the year. The kindergarten bento I make is nothing special, but I’m glad my daughter happily eats it everyday at school. There are so many stories associated with this simple box with packed food. I love sharing these stories with you here, and I’d like to thank you so very much for reading my postings.
Happy holidays! 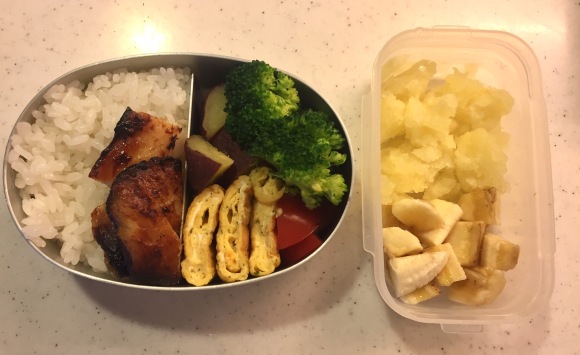 My daughter went back to school after being absent for a few days due to some stomach bug. Following the doctor’s advice, I avoided using heavy ingredients that might upset her sensitive stomach once again.

Well actually, over the weekend we took her out for lunch since she was already feeling much better and had too much energy to stay inside. It was very crowded everywhere with the holiday season, and we took a seat at the first restaurant we found a table, which happened to be a French crêperie. She & I shared a gallette complete and a crêpe with Nutella. She ate them contently then, but after a while she had to go to the toilet, and we had to cut a long queue to barely make it. It’s totally my fault…. so no butter no sweets no cheese no grease for a little while…😭

The morning started normally, and I prepared a bento for my daughter, woke her up, and got her dressed in the kindergarten uniform for another exciting day. We all sat at the breakfast table and started eating, but our poor girl had absolutely no appetite. Usually she is a vigorous eater especially in the morning, but she refused to touch anything, even her glass of warm milk.

This is very rare for her, and despite her protest (she loves her kindergarten and insisted on going without eating anything) I called the school and notified them about her absence. My gut feeling told me to keep her at home…. and I was right.

It turned out that she had gotten some minor tummy bug, and didn’t eat almost anything for the entire day, of course including my bento. It ended up to be my lunch, so at least it wasn’t wasted. Ha, the joy of motherhood! 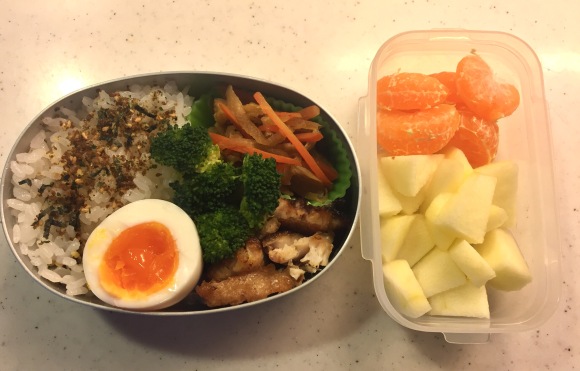 I heard somewhere that komatsuna can be even more nutritious than spinach. Our daughter always eats it if it’s mixed with something else, so today I mixed it in freshly cooked rice. Sesame sprinkle on top.

(Obviously,) The dinner leftover Chicken Marbella for bento today. Our little one asked not to put any prunes or olives, which play very important roles in this dish… oh well.

I cooked the simmered sword fish and hijiki last evening for dinner along with a couple of other dishes. When my daughter sat down at the dining table and had one look at what I prepared she said crossly, “Why do you always give me the same food as bento? Why do you always use leftovers for dinner?” 😳

Of course I intended to reuse the fish and hijiki for her bento the next day, but didn’t realise that my clever 4 year old was quite aware of what I put in her bento and feed her for dinner. She got the order wrong, but still she’s right, usually there is at least one dish duplicated between lunch and dinner within the same day.

Being a little miffed I asked, “Is there something wrong with the leftovers? Do you not like what I cook for you? Do you want me to stop making you bento????? (yes, I was getting more childish at this point against my 4 year old daughter) ” – and her response blew my mind away and stunned me.

“I love it! You are the best chef in the world, Mama!”

Today and tomorrow, I am out during the day to exhibit at a charity bazaar at an international school near by. I don’t know if I’d ever mentioned here, but I promote Japanese art and craft as my part time job. At the bazaar this time, I am representing a Japanese ink artist, and we are selling some of her accessories such as scarves and greeting cards, along with a few artwork pieces from her accessible range of collection.

Anyway, it’s Monday today, but my daughter’s kindergarten happens to be closed as a substitute holiday for this “art exhibition” they had had at the kindergarten on last Saturday. I totally missed this important piece of information when I registered for the bazaar… Oops. What do I do with her while I’m out? I can’t take her to the bazaar as I wouldn’t be able to focus on the sales, and I cannot put her to daycare because it costs a fortune. The same for babysitters. My husband of course has to work, and my mum (the most reliable person when it comes to babysitting my daughter) couldn’t change her work shifts. After a moment of panic I surrendered and called my dad for help. He is semi-retired and has plenty of time free, but he is an old type and has almost no capability to take care of a child, let alone our super active 4 year old, and himself also perhaps. But I considered he should be able to spend a few hours with a little girl if I prepare everything for them in advance. I’m sure nothing disastrous would happen. I’d just have to accept some chocolate and icecream stains on my little girl’s sweater later today.

* Just to give my dad some credit, he successfully completed his first mission to babysit his granddaughter. Thank you Jiji (‘grandpa’ in Japanese)!