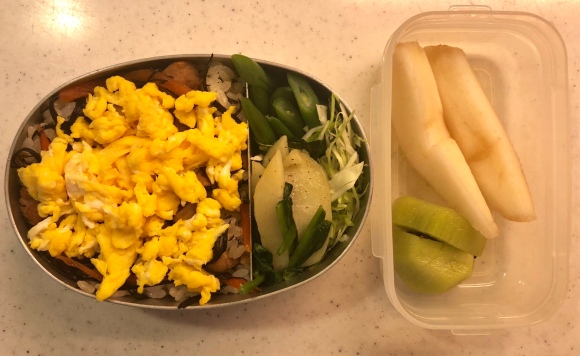 Summer holiday starts at the end of this week (usually 21st of July) in most of the public schools in Tokyo. Our daughter’s school is one of them, and today is the last day for me to prepare a bento for the next 40 days. Despite the joy of bento making for my dearest daughter, it is such a relief not having to do so every day for a while.

The daily bento making will resume in September. Until then, I will try to write some essays on cultural topics I’ve meant to write for a while…

Thank you always for visiting my blog. It means a lot to me.

This was our daughter’s bento on Wednesday. She has eaten all the ingredients in the bento box numerous times in the past, including kiwi. The bento box was empty when she came home.

The following day on Thursday, she developed some allergic reaction at school, an hour after she ate her breakfast. I had to rush there to pick her up after the emergency call from her teacher. When I arrived, she was sitting on the large sofa in the teachers’ room alone looking a little sheepish, but I could tell she was secretly enjoying this special attention from everyone. As I approached her more closely, I could see these pink spots all around her cheeks. She had rashes on her legs, too. I took her to the doctor afterwards, who said it was most likely the food she ate for breakfast in the morning. She ate normal breakfast, nothing special, but including kiwi.

My daughter was tested for allergies when she was about two years old, and the result came out completely clean. I do understand that this can change after a few years for young children, but I just cannot believe that something she had eaten the day before without any allergic reaction could cause such severe reaction the next day. But the doctor mentioned it still could be it (or at least one of the possibilities). And funny enough, my daughter also insists that it was kiwi. She says whenever she eats kiwi, it tastes “sour & spicy.”

Hmmmmm I guess I’ll need to have her tested once again.