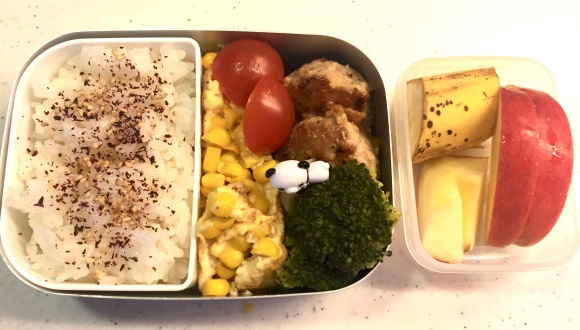 As requested by our little big girl, today’s main dish is meatballs. I used chicken thigh mince, chopped onion, egg, oregano and salt & pepper for the pâté, and soysauce, sake & mirin for the sauce. For bento it’s better to put rather strong seasoning/sauce, since the taste gets blunter when it gets colder, and it is better for preserving the food in the summer heat/humidity. I heard it’s better to put something alkaline in packed lunches for the same reason such as one of the Japanese famous confectionary called umeboshi (highly salty and sour pickled plums), but I just can’t eat them and never served them for our little one… She seems to have the similar taste buds as mine not being able to eat something sour, so it’ll take some effort to have her eat umeboshi…😓